Shingon Reiki is a Reiki style founded by Mark Hosak in 2005, that combines the traditional Reiki by Mikao Usui with Eastern and Western Wisdom Teachings of Tantric Buddhism, psychology and magic.

The foundation of Shingon Reiki is Usui Reiki Ryôhô the traditional system, founded by Japanese Mikao Usui in 1922.

The main idea of Shingon Reiki is found in the message on the memorial stone next to the grave of Mikao Usui again. In 2013, Mark Hosak finished translating the ancient inscriptions and has come to the conclusion, the way Mikao Usui had seen Reiki:

“The meaning of Reiki is to develop supernatural abilities and their own spiritual development. Besides that, we can also take care of symptoms. “

In addition to the traditional symbols of Mikao Usui more mantras and Siddham (symbols) are taught the Shingon school of esoteric Buddhism and applied.

To be able to distinguish Mark Hosaks seminars from Usui Reiki, his seminars simply have a different name: Shingon Reiki.

Etymology of the Shingon Reiki 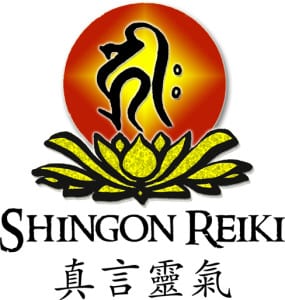 The “Shingon school” is the oldest school of Japanese Esoteric Buddhism (also called Vajrayana in Tibetan Buddhism or Vajrayana). Mikao Usui was very familiar with this, because he was a monk of the Tendai school of esoteric Buddhism which took over the teachings from the Shingon school. In the Japanese Tendai school, the esoteric secret teachings has been adopted in the 9th century. From there he took over, inter alia, the origin of the Reiki symbol for the mental healing and the Siddham Hrih.

The Esoteric Buddhism includes the core doctrine of Mahayana Buddhism. In the heart of the matter, even to renounce the full enlightenment until you have helped all others to follow the path of her heart.
Objective here is that inherent in every being to recognize the “Heart of Enlightenment” (bodaishin菩提心).

In addition, one learns in Esoteric Buddhism a series of magical tools. Rituals and meditations healing with symbols and mantras that help to obtain the “Heart of Enlightenment”.

Under “Heart of Enlightenment” (Tib Buddhism. Bodhicitta), refers to the realization that the spiritual heart (kokoro心) is basically pure and enlightened.

From nature, this is similar to the lotus that grows in the mud, but on the flower, no grain of dust can settle. The sludge symbolized in the human world, the confusion of the mind and the karmic entanglements. These show, for example, in many lives and especially in the personality. Consequently, it is possible that anyone can attain the spiritual sludge as a basis, the purity of the heart (spirit).

Rituals and Meditations of Healing

Rituals and meditations assist in healing. Healing is especially meant with their own continuous improvement of completeness. This is similar to a diamond, which is found in the earth. By recurring cleaning and polishing it gradually shows its true beauty. This phenomenon describes Usui with the concept of original nature (Honsha本者). These are the first two characters of the Reiki symbol for receiving a remote contact, which is a magical sigils (from the Latin Sigillum “seal”).

The rituals and meditations of healing, including the mantras (shingon) and symbols called Siddham (bonji 梵字) are a form of “eastern magic”. In the “Western magic” there are those as well. While the symbolism differs in some ways, but both have the same goal.

In the “western magic” it is the “work in the Great Work” and in the “eastern magic” of the “path of enlightenment”. These relationships were recognized by Mark Hosak (Budologe, Japanese studies and art historian of East Asia) in his research as part of his doctoral thesis on the Siddham writing in Japanese art associated with rituals of healing.

In addition, Mark Hosak discovered another finding: In “western magic” is often spoken of a so-called “Od-force”. The word “OD” stands for “the God Odin”. “Od” means life energy. In the literature of magic is pointed out that one has to pay attention while working with rituals and acquiring supernatural powers, because of the possibility of losing ones own Od force.

This notice gave Mark Hosak the idea of combining Reiki with “western magic” to cancel the problem of energy loss and at the same time to work in a completely new way magically. Thus, a further component of Shingon Reiki was born.

Basic elements of the Shingon Reiki

The basis of the Shingon Reiki is the traditional Reiki by Mikao Usui called Usui Reiki Ryôhô 臼 井靈氣 療法 to develop supernatural abilities such as healing with hands to spiritual development, for consideration in the context of spiritual healing, to activate the self-healing powers.

In addition, further developments of Mark Hosak based on his many years of research with meditations and healing rituals of Esoteric Buddhism, that Mark Hosak explored in the context of his dissertation that he has learned in Japan in the Buddhist monasteries, plus the combination of Eastern and Western magic.

Mark Hosak developed the idea of Shingon Reiki in 2005. The first signs of this have already been published in 2004 in the “Big Book of Reiki Symbols”, where Mark the relationships between Reiki and Esoteric Buddhism extensively explains. He has since then been treating himself and friends.

Until 2013 Shingon Reiki was not brought to the public because it was not Mark’s interest to create another new Reiki style.

As part of his dissertation research on magic and Reiki and by the request of his friends as well as some Reiki students, Mark Hosak decided to teach Shingon Reiki in mid-2013, to the Master degree.

Mark Hosaks Shingon Reiki courses include exciting, mystical and effective content from his research in the field of Reiki.

Symbology and hermeneutics of the content of the new translation of the inscription on Usui’s memorial stone, spiritual work with Siddham symbols from the Shingon Buddhism Gumonji-hô (Venus Morning Star meditation), that in all probability Usui had practiced on the Kurama Mountain and the spiritual work with the Medicine Buddha, its symbols and mantras.