Reiki and calligraphy are closely related. First of all, Reiki comes from Japan and is therefore interwoven or influenced by Japanese culture. The memorial stone by the tomb of Mikao Usui, who describes his life and work with Reiki, is chiseled into the stone by a calligrapher. There are also the Reiki characters (Kanji), which have spread over the years in different forms of calligraphic and artistic design in Reiki circles and thus in the Internet and in print media.

The Reiki characters written with the brush are a calligraphy. Many Reiki practitioners wish to be able to write these letters or other signs with the brush, to learn them or simply to have such a calligraphy. Those who actually take action, and procure brush, ink and paper, will soon realize that writing the Reiki characters with brush and ink often do not lead to the desired results as on a template. Why is that? Calligraphy is an art and a craft that can be learned gradually under the guidance of a qualified teacher. 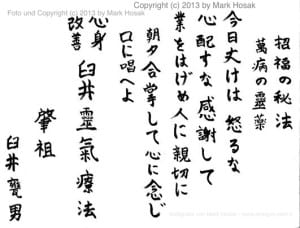 Spiritual calligraphy, as well as traditional Chinese and Japanese calligraphy, is more than just beautiful writing. Both in the lettering and in the calligraphy, as well as in the spiritual calligraphy, is written on the so-called rice paper with the classic brush and ink. So one might think that everyone cooks their soup with the same water.However, that’s not quite true. In Japan, for example, calligraphy is differentiated into the disciplines of the beautiful letters shûji 習字 and the path of the brush shodô 書 道. Every Japanese learns the beautiful writing with brush and ink in school. He learns to write the characters in such a way that they look as if they are Japanese. Each character is pressed into a square form if possible. The order and shape of the strokes is just as important. Actually quite similar to drawing and applying Reiki symbols of the second and third degree (master grade).

Shodô 書道 – the way of the brush

The correct way of writing is more a prerequisite for the way of the brush, whereby the beautiful appearance as the end result is preferred to a special force, which starts from the calligraphy. The individual strokes are trained as if every single stroke is a work of art. Thus, a stroke with the brush is not just left to right. Rather, the brush is literally dipped in the paper and guided in circles and spirals with upward and downward movements, as if one were making a Taichi form with the brush until the single stroke is brought to its perfection, before flowing into the next stroke of the same character.

In order to get into this momentum and to bring this power with brush and ink on the paper, it requires a meditative state of the calligrapher. It becomes clear at this point that the art of calligraphy, or even the way of the brush, is a spiritual method of self-discovery and self-realization with an enormous expressiveness. Even a single character written as a spiritual calligraphy, can exert a magical effect on the viewer. Several characters together make up proverbs or even poetry, whereby not only the content, but also the calligraphy and the context in which this work of art originated play an important role. This in turn is related to the history of calligraphy.

Calligraphy was created in China in the course of philosophical and ritual Daoism to create and copy texts and to create talismans and amulets. In Japan, Chinese calligraphy is used both as an art form and for ritual purposes, such as copying Buddhist sutras. About the memorial stone of Mikao Usui at his grave is known that Usui was a Buddhist monk and that he knew about spiritual and occult methods that work with calligraphy. Originally, the Chinese characters handed down to Japan since the sixth century were not developed to write a language but as a pure ritual script.

Any form of preoccupation with calligraphy, from spreading the utensils to rubbing the ink, to writing every single stroke as well as the point, is a meditative act. One sinks fully into the moment and forgets space and time. Through writing one gains deep knowledge of the meaning of the signs in connection with oneself.

It soon becomes apparent that each stroke is a work of art in itself, and that many strokes become signs, and therefrom, texts with profound meaning. It is not so much about simply writing beautiful characters, but rather about transferring the life energy ki 氣 with ink onto paper with the brush. If this succeeds, expressive characters emerge as if they were jumping out of the paper.

The seminar of Spiritual Calligraphy

In the Spiritual Calligraphy Seminar, the basics of using the Four Treasures, i.e. brush, ink, rubbing stone and paper are explained and taught to use meditatively. The rubbing of the ink is also followed by meditative basic exercises with the painting of the circle, which plays a special role in Zen calligraphy. At the same time, the basics of writing are trained in order to be able to write individual characters in the correct order of lines full of life force.

After practicing some simple signs, such as Heart 心, Sun 日 or Moon 月, participants can freely choose their own characters according to their needs. It is possible to choose combined terms such as Aikido, Reiki, Dragon or your own name. The characters to be practiced are then pre-painted by Dr. Mark Hosak, so that they can be copied from this original, as is custom in classical calligraphy lessons in Japan.

The aim of the seminar is, among other things, to calm down the heart via calligraphy, to express the inherent power of the sign and to take home a self-painted beautiful version at the end. Second-degree Reiki practitioners or Reiki masters also get a new sense of how to use the Reiki symbols through the practice of spiritual calligraphy, as they virtually draw a calligraphy in the air. Participants in the Spiritual Calligraphy seminar report time and again that they did not previously expect such an extension of their Reiki skills with the symbols. They believe that only now have they come to understand the meaning of the symbols and truly use their power.

For the seminar ones own utensils can be brought. What is needed and where it can be ordered, will be announced at registration. However, it is not recommended to use most calligraphy sets because the brushes are usually too small.

Dr. Mark Hosak has been working on Chinese and Japanese calligraphy for over 20 years. He studied East Asian Art History and Japanese Studies at the Universities of Heidelberg and Kyoto Daigaku, focusing on calligraphy, symbology and Buddhist ritual art. During many trips and his three-year stay in Japan, he was able to learn a lot about Japanese culture in the fields of calligraphy, Buddhism, healing art and martial arts and to make it easy to understand for the West. Today Dr. Mark Hosak lives in Eberbach near Heidelberg and directs the Shingon Institute Rhein-Neckar, where he teaches traditional Buddhist rituals, as well as shamanic healing and martial arts. This also includes spiritual calligraphy for the healing of one’s own heart / spirit. Writing about the Siddham scripture in rituals of healing, out of which the mental healing symbol developed, Dr. Mark Hosak received his doctorate from the University of Heidelberg.