The Usui memorial stone and the Meiji Tenno

Mikao Usui as stated on his memorial stone, that he was faced and gave in to the Meiji Tenno. This is certainly connected with the fact that Usui was born into a Samurai family. The Samurai saw particularly in the Meiji period (1868-1912) as loyal protectors of the Meiji Tenno, even if it is described as historically they have rebelled against the Meiji Tenno. 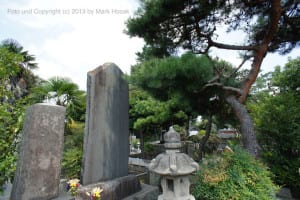 On the memorial stone at the grave of Mikao Usui is mentioned that the Usui Life-Rules pertain to the teaching of Mikao Usui. An important component of this was supposedly to obey the instructions of Meiji Tenno. Therefore it has awakened the impression to some in the West that the rules of life were also written by the Meiji Tenno. On the other hand are many historical facts speaking against this.

Many modern Japanese can hardly read such complex texts in classical Japanese written language today, let alone understand it. In Japanese, following the instructions of the Meiji Tenno is preceded by performing the Gassho meditation with the rules of life. This means that from this point of view at the time Usui asked Meiji Tenno for instructions about his own teaching or that this was a prerequisite for Usui. From that time until the end of World War II the assumption was that the Tenno was of divine origin.

Some Reiki masters in the West are of the view that preoccupation and recitation of poems of the Meiji Tenno are equally important in the context of the Usui Reiki and rules of life. The will, however, contends that the poems were only a personal expression of emotions. Consequently, they have neither something to do with Reiki nor with following instructions of the imperial Meiji Tenno.

However, when comparing the contents of the 12 points with ancient versions of the rules of life, fall partly some similarities. It has often been suggested that “honor your parents” or “earn your bread honest” is in life generally related to the Ten Commandments of Christianity and that someone from the West had added this content. However, this seems to be a mistake in more ways than one, because exactly the first place in the decree of Meiji Tenno emerge such sentences, which means that it must have, secondly given early confusion between Usui life rules and the decree of Meiji Tenno.

Adoption of Meiji Tenno in Japanese

Adoption of the Meiji and Supplement in English

Love and honor your parents. Go peacefully and helpful to with your siblings. Spouses should each take care for harmony. Friends should trust each other. Respect others and also restrain and dominate yourself. People should be met with philanthropy (love of mankind). Science should be studied and learn the techniques. In this way we will enhance our knowledge and skills. People of high rank should be perfected and strive on their own for the common good. One should pursue a profession that serves the state and society. Here you should always keep the importance of the constitution of the state in mind and obey the laws of the country. If necessary, one should show courage and justice and prove these things. This is to be followed between heaven and earth for all eternity. Such people are (Tennô) for me, not only loyal and virtuous citizens, but they will also let the children know what this is for an exceptional tradition and meritorious performance. Such a path is the teaching that our ancestors have left us. All citizens of our descendants are to follow this issue. Regardless of whether that was followed from the past to today, what will happen at home and abroad, there is no reason to turn their backs on the reason. I would therefore like (Tennô) to enshrine this with you my people irrevocably in memory. I sincerely pray that the perfection of our personality becomes our common possession.”

After the death of Meiji Tenno 1912 nationalized then to the term Meiji Tenno no ikun (instructions left by the late Meiji Tenno ) as a fixed phrase. In this respect, it can be seen that here on the memorial stone, whose space is limited for the content, certain partly historical keywords are used, behind which hides much more than it first appears. Since Usui had heard and lived this imperial decree during his lifetime, it is not surprising that this is mentioned here.

Striking at the instructions of the Meiji-Tenno, the first call: “Love and honor your parents.” This is similar to namely one of many circulating translations of the rules of life with the sentences “honor your parents, teachers and elders; just today earn your bread honestly. ” However, there is nothing to be found in writing or spoken of in the five precepts. So it seems that at some point someone has dealt with the imperial instructions and those attributed to the rules of life of Mikao Usui and for omitting other sentences. Also one could assume that there are other unknown sources of life rules of Mikao Usui. As long as these do not appear in the original Japanese language, these are only speculations.